Are You Typewriter Suppliers?

Every month, thousands of people enquire for Typewriter Suppliers on Getatoz

Are You Looking For Typewriter Suppliers?

Get verified and top suppliers of Typewriter 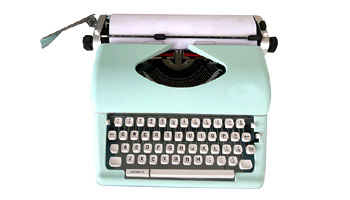 Get Verified Sellers Of Manual Typewriter 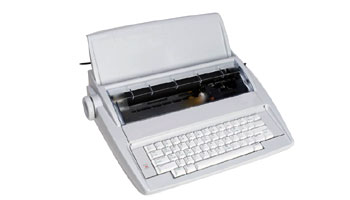 Get Verified Sellers Of Electronic Typewriter

A mechanical or electromechanical machine for writing characters similar to those produced by movable type of a printer is known as a typewriter. It is called a typewriter as it lets you write on the page with pieces of type: slugs of metal, with raised letters on them, which make neat, printed marks on the paper. The raised letters are molded in reverse to print them correctly on the page. It is an indispensable tool for practically all writing other than personal handwritten correspondence. These are widely used by professional writers, in offices, and for business correspondence in private homes.
Now a days typewriter is replaced by computers. But typewriters are still used in many Indian cities and towns, especially in roadside and legal offices due to a lack of continuous, reliable electricity. The QWERTY keyboard layout remains the standard for computer keyboards which was developed for typewriters.

How does a typewriter work?

The keyboard is at the front. The paper moves from right to left on the carriage at the back. There is a complex arrangement of levers and springs in between. This is completely mechanical that is powered entirely by your fingertips. It has no electrical or electronic parts. When you press a key and a lever attached to it swings another lever called a type hammer up toward the paper. The type hammer has the slug of metal type on the end of it. Just as the type is about to hit the page, a spool of inked cloth called a ribbon lifts up and sandwiches itself between the type and the paper. So the type makes a printed impression when it hits the page. A spring makes the type hammer fall back down to its original position when you release the key. The carriage which is the roller mechanism holding the paper moves one space to the left at the same time. So it doesn't obliterate the mark you have just made when you hit the next key. The carriage continues to write as you type, until you get to the right edge of the paper. You have to press the carriage return lever when a bell sounds. This turns the paper up and moves the carriage back to the start of the next line.

A manual or mechanical typewriter is a machine where everything is operated by finger power. The force of your fingers makes the ink appear on the page. That is why mechanical typewriters often produce rather erratic, uneven print quality. Because it's hard to press keys with the same force all the time. The type hammer mechanism stays still while the paper (wrapped around a rubber roller on the carriage known as the platen) gradually moves to the left in a manual typewriter.

Most electric typewriters do away with the system of levers and typehammers. In some models, the type is mounted on the surface of a rotating wheel called a golfball. A daisywheel is used by other models which looks like a small flower, with the type radiating out from the end like petals. The keys on the keyboard are made of electrical switches that make the golfball or daisywheel rotate to the right position and then press the ribbon against the page.
In Electric typewriters, every letter hits the page with equal force as the type is hammered under electrical control. So the much sharper, neater and more even print quality is a big advantage of electric typewriters. In an electric typewriter, the paper and the carriage stay still while the golfball or daisywheel gradually move to the right. When you reach the end of the line, you press the carriage return key. The golfball or daisyweel whizzes back to the extreme left position and the paper turns up a line.

How can Getatoz help in getting the best Typewriter Wholesalers near you?

You can browse Typewriter Wholesalers on the basis of your location. Submit your requirement and suppliers will contact you with their best price offers for Typewriter. Getatoz have some of the Best Typewriter Suppliers of 2020