Sikkim also known as "Home to the Kanchenjunga" is the smallest state in northeast India. It borders Tibet in the north and northeast, Bhutan in the east, Nepal in the west, and West Bengal in the south. Sikkim is also located close to India's Siliguri Corridor near Bangladesh. Sikkim is the least populous and second smallest among the Indian states.The mountain peaks with large variety of plants, holy lakes, ancient monasteries, orchid nurseries and trekking routes make Sikkim a perfect Holiday destination. The name Sikkim is is a combination of two Limbu words. su, which means 'new', and khyim, which means 'palace' or 'house'. This state is called as 'Sukhim' or the New Place by Nepalis, called as the 'Demazong' or the Valley of rice by by the Bhutias and 'Nye-mae-el lang' or the abode of the Gods by Lepchas. The capital and largest city of sikkim is Gangtok whose 35% of the state is covered by the Khangchendzonga National Park. Modern Sikkim is a multiethnic and multilingual Indian state which has 11 official languages including Nepali, Sikkimese, Lepcha, Tamang, Limbu, Newari, Rai, Gurung, Magar, Sunwar and English. However, English is taught in schools and used in all government documents. The largest share of cardamom production in India is in sikkim, and it is also the world's second largest producer of the spice after Guatemala. Plastic water bottles and styrofoam products are banned in this state making it as India's most environmentally conscious states. Noodle-based dishes such as thukpa, chow mein, thenthuk, fakthu, gyathuk and wonton are common in Sikkim. Momos which are steamed dumplings filled with vegetables, beef or pork and served with soup are a popular snack. Sikkim has a National Institute of Technology, currently operating from a temporary campus in Ravangla, South Sikkim, which is one among the ten newly sanctioned NITs by the Government of India. The entire state is almost hilly, with an elevation ranging from 280 metres (920 ft) in south at border with West Bengal to 8,586 metres (28,169 ft) in northern peaks near Nepal and Tibet. The summit of Kangchenjunga, the world's third-highest peak, is the highest point of the state, situated on the border between Sikkim and Nepal. For the most part, the land is unfit for agriculture because of the rocky, precipitous slopes. However, some hill slopes have been converted into terrace farms. 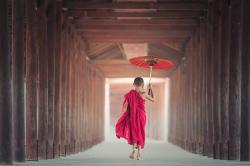 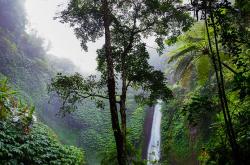 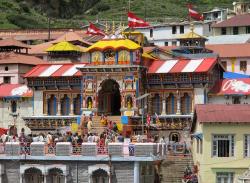